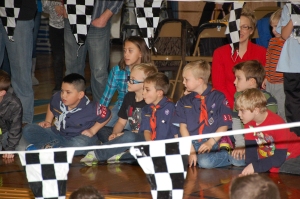 Pack 3258 Pinewood Derby is usually held on the last weekend in January.  In 2018, it will be on Sunday afternoon, January 22nd.

Boys receive their car kits at the December Pack Meeting.  A few adults and area troops offer workshops to help the boys cut their cars.  The boys sand and paint their cars at home.

The cars are on display at school for a week to let the student body vote on their favorite cars, and then again for another week to showcase the winners.

Parent Volunteers are needed to set-up and take-down the track, check cars in, sell concessions, run the race, and manage the awards.  Susan Gloeb is the Pinewood Derby Chair in 2017.